Places of the Heart: Garden and Memory 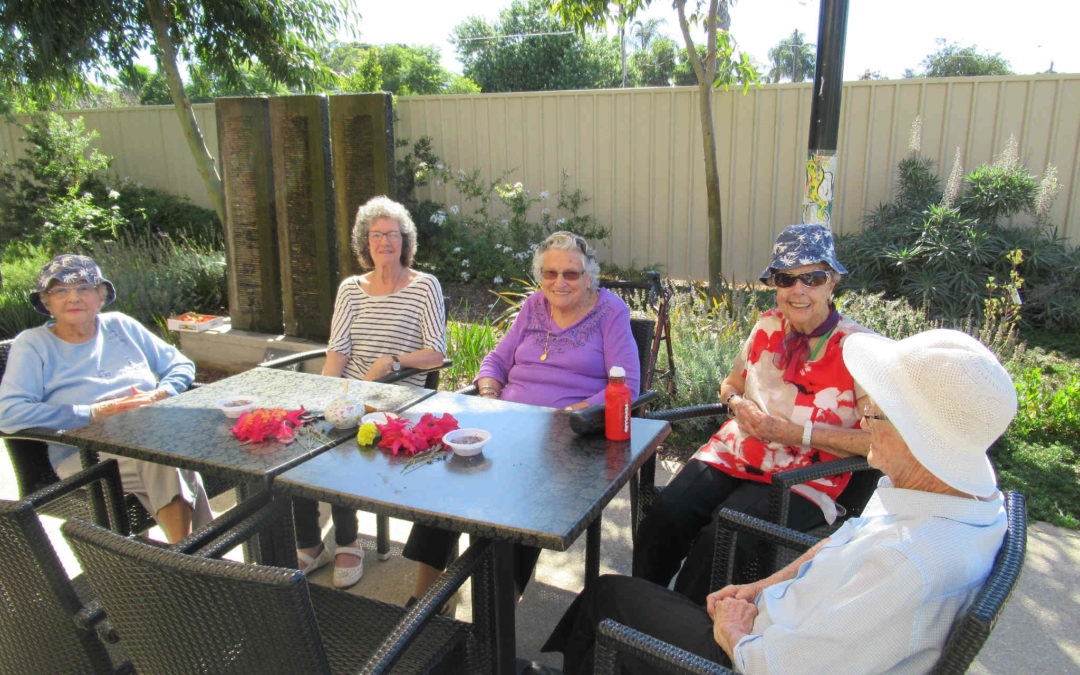 The Warrawee (Indigenous word meaning “rest here”) garden at Resthaven Marion is a place of relaxation, a delight to the eye and senses, with nooks for pausing and engaging in memory. It lends itself to group celebrations and exercises in joyful recall. As such it has become pivotal in leisure activities focussed on resident well-being.

Recently a large number of residents gathered for another sharing in the program “Spirituality in the Garden”, a well-being program centred on mindfulness. Residents were seated around tables in groups of six. Prior to being seated residents who were able were encouraged to walk around the garden pathways and collect a few leaves from the trees, a bloom from a plant as well as a sprig of lavender. Each table had as part of its centre a small dish of water. The leaves, blooms and sprigs of lavender were placed around the dish of water. Each table group had leaves that were a mixture of those still green and those yellow/brown that has already fallen as autumn leaves.

Our first exercise was to consider the leaves. In handling the leaves we considered ourselves firstly as a green leaf. This leaf reminds us of the vibrancy of living and being and the hopes associated with that memory. Our lengthier focus was on the yellow/brown fallen leaves. These leaves reminded us that even though we might be considered, or even imagine ourselves, in the autumn of our lives, there is still beauty, wonder and colour in our lives.  There is still life before us that can be shared in its autumnal glory toward giving joy to others and to ourselves.

Each of the small dishes of water in the centre of the table had a drop of essential oil in it. As part of our second exercise residents were invited to rub the lavender between their fingers, dip the fingers into the water – and then – no direction was given as to what was to follow. Some residents brought their fingers to their nose to smell the fragrance. A few ladies rubbed their fragrant fingers on their wrist; others dabbed their fingers behind their ears. These actions they recounted were part of remembered war and  post war times when there was no perfume to be obtained and lavender water was the only sweet smell of the day. This led into some brief reminiscing of loved husbands or ‘boyfriends’ and the joy of reunion after the sounds of battle had ended and the smell of lavender was part of a loving embrace.

We concluded with an afternoon tea of “muffins” with different coloured icing. The colours were part of reinforcing our reflections especially through the meaning of colours in the Autumn of our lives.