Grief: the price we pay for love 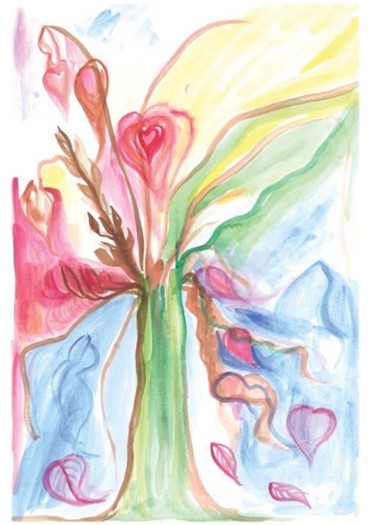 And can it be that in a world so full and busy, the loss of one weak creature makes a void in any heart, so wide and deep that nothing but the width and depth of vast eternity can fill it up.
Charles Dickens, ‘Dombey and Son’

In September, 2011 my beloved mother died in her sleep at the age of 95. She had moved into a ‘low care’ residential facility eighteen months before her death and had found it extremely challenging. She said it was harder than migrating from The Netherlands in 1952 and that was saying something!  Although she was of very sound mind, a heart attack had shaken her confidence about continuing to live independently.

On the day before she was to have a pacemaker procedure she showed me a list of all her previous operations and her various medical conditions.  She had written the words: ‘enough is enough’. She had once told me that she felt like a tree that was losing all its leaves one by one and the memory of that conversation inspired me to paint the Tree of Hearts  in her honour. It was my way of saying good bye, I love you and thank you as I grieved for her, the mother I had known as my secure base for over sixty years.  I never saw her again alive and was about to return to Melbourne from Vancouver  to visit her.  In her last email she told me how much she was looking forward to us going shopping together and having coffee and cake somewhere.

I Wanted To Take You Shopping

I wanted to take you shopping

For one last special treat,
A piece of apple strudel,
Perhaps a strawberry tart.

A cappuccino for you,
A latte for me.

I wanted to take you shopping
To buy a new dress,
But you slipped away in your sleep instead

I wanted to take you shopping…

During  the Covid19 lockdowns in early 2020, my husband became increasingly frail due to COPD and a Parkinsonian condition. A planned rehabilitation program was cancelled. Despite struggling with reduced mobility, hearing loss and failing eyesight, his spirit was strong and  as always, we were a mutual adoration society.

Although some people used to tell me that I was his carer, I would say: I know, but he is my carer!  We were happy and content in our lockdown bubble.

He would laugh and say that it was not just leaves that were falling off his tree, but whole branches!  He died unexpectedly in November that year after a night out with friends celebrating the end of yet another lockdown. His death during the night came as a terrible shock. Like my mother’s death it was an ‘acute natural death’, and once again there was no opportunity to say goodbye. To paraphrase C.S. Lewis in his profoundly wise and helpful book, A Grief Observed, my husband’s absence was like the sky, it covered everything.

There is probably nothing more challenging to our sense of self and what gives our lives meaning than a  significant loss or a major bereavement.  Loss and grief is an inevitable part of the human condition because of the way in which we attach to others from birth. It is exactly because we form attachments to people, places and possessions that we experience grief when these attachments are broken or threatened. Indeed, leading English psychiatrist and pioneer in bereavement research Dr Colin Murray Parkes reminds us that grief is the price we pay for love:

‘The pain of grief is just as much part of life as the joy of love; it is, perhaps the price we pay for love, the cost of commitment. To ignore this fact or to pretend that it is not so, is to put on emotional blinkers which leave us unprepared for the losses that will inevitably occur in our own lives and unprepared to help others cope with losses in theirs.’

Participating in a Zoom art journalling group has been one of the ways in which I have been healing the pain of my bereavement. Apart from conversations with loving and non-judgemental friends and family, I have also worked with a Jungian therapist on ‘reinventing myself’ and building a new life alone. From all my years of working with grief professionally, I know that bereavement is as much about the loss of self as it is about the loss of the other. Looking good and feeling better is often recommended for cancer patients and I have found that adopting a whole food plant based style of eating, going to the hairdresser and exercising has been very helpful. I have also been a member of a poetry circle for the past few months and have continued to write what Elizabeth McKim calls, ‘brave poems’.

As  Poet Laureate for the European Graduate School in Saas Fee, Switzerland where I studied for my doctorate, McKim says that ‘all poems are small stories of who we are, where we’ve been and where we are going. The poem is a small drop with many interconnected circles which keep moving outwards’.

After my husband died, I discovered that it is often the hundred and one small things we used to do together that  can trigger pangs of grief. Going shopping without him was painful at first. Like my mother he loved going shopping and browsing while I had a more focused approach!

I thought I saw you in Coles today.

At the end of Aisle Eleven,
You were pushing your shopping cart,
Blue walking stick safely stowed,
Wearing your signature flat cap,
The Kangol we found at Schiphol.

Carefully you gathered what we needed,
And didn’t need.

Reading the labels and looking for treats.

The apple tart from Holland
Became a special favourite.
It tasted just like the one my mother used to make.
It was big enough for ten, but in it went.
We shared it with friends,
Until Coles stopped importing them.

You chose the thick Greek yoghurt,
Easier to swallow, you said,
And the Dutch cheese, but never Edam.

You bought the frozen berries.
They’re still in the freezer 5 months after your death.
I can’t bear to finish them.

One day there will be nothing left that you touched,

Older people are often thought to be resilient when it comes to loss and bereavement. However, the sheer volume of loss experiences in later years can overwhelm the most resourceful and capable among us.  Any sentence that begins with ‘at least’ tends to minimise experiences of loss and, just like platitudes, offer cold comfort and reinforce the loneliness and isolation. We need to make time for grief and make sense of our experiences of loss with caring compassionate and wise people. I have come a long way in 18 months but the journey is far from over.

I have, however, finished those raspberries!

The image shown is Irene’s painting, Tree of Hearts.